While Friends of the Neonatal Unit has a strong and passionate following in the North East, we now also have a supporter from the other side of the world.

We recently welcomed back the wonderful Neonatal Expert Mary Coughlin to the Aberdeen Maternity Hospital’s Neonatal Unit to see how the work she helped to implement earlier this year is progressing!

Working with a ‘Champions Team’ of staff from the unit, Mary initially asked staff what they felt could be changed to benefit babies and their families, then tailored a programme from the feedback.

She also showed staff how to involve parents in comforting their babies at a time when illness can often separate parent and child.

Mary is an expert in the care of extremely small and critically ill babies. Throughout her career, she has helped train thousands of clinicians across the world and founded her own health consultancy business Caring Essentials Collaborative.

Nicole Bauwens, Clinical Nurse Manager at the unit, first discussed the idea of coming to Scotland with Mary a few years ago.

Since then she has been in regular contact with Mary and, with the help of Friends of the Neonatal Unit, brought her to Aberdeen to share her knowledge.

Nicole said her visit has made a huge difference to the babies and their families, specifically with the introduction of two-person care. 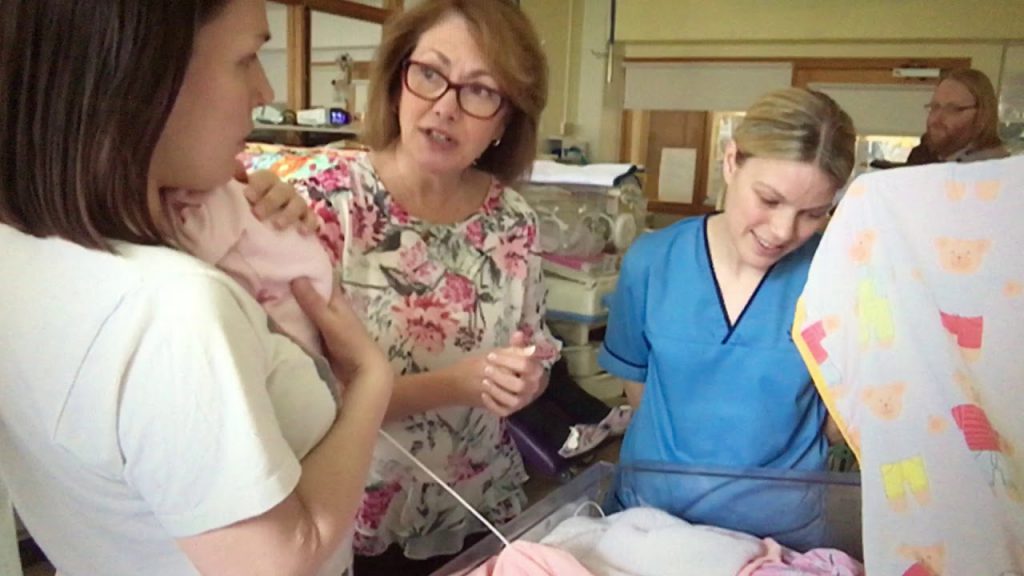 She explains: ‘Two-person care is where one person, the parent, has the sole job to comfort the baby and the other person’s sole job is to carry out a procedure on baby, helping baby to feel settled and comforted throughout the process.

‘This helps parents not to feel like an outsider or a visitor to their baby; they are involved in their baby’s care whilst also minimising the any trauma.

‘A nurse said to me earlier on in the week it’s as simple as the babies don’t cry anymore.

‘We’ve had lots of positive feedback and we’ve actually had some parents who have written into us, who have had babies in years ago, to say how amazing the work with Mary is and how happy they are that the unit is moving forward.

‘Parents definitely know their baby best and we’re just helping them do things much earlier than they would have done in the past.’

For Mary, she remains humble, and believes the real change in the unit has been made by the amazing team at the unit.

She said: ‘It does feel weird that they call this the Mary Coughlin project because really, it’s not me. I’m just guiding these guys in the right direction so they can really optimise the care that is being provided. They are already doing awesome work so it’s not about me, it’s about the team. They are so passionate, innovative and self-deprecating.’

Both Mary and Nicole were vocal about the funding from Friends of the Neonatal Unit, and we’re happy to have played a part in making this possible.

Nicole added: ‘None of this would have been possible without the backing of the Friends. They believed in the team here and the difference we could make.

‘It has made a big difference to the families and the babies and really helped in the teamwork aspect of staff in the ward.

‘This isn’t the last of Mary’s work in Aberdeen. We’re really hoping we can hold on to her.’

If you’d like to support Friends of the Neonatal Unit, there are plenty of ways to do so! Whether you volunteer, donate, or take part in one of our upcoming fundraisers – please get in touch at [email protected]!